NY-ის Fashion week- ზე Jason Wu–ს 11/12 RTW collection-მა ყველას მოწონება დაიმსახურა, მას წარმოდგენილი ჰქონდა როგორც outerwear ასევე red carpet Look - ები. კოლექციაში ჭარბობდა მაქმანები, პრინტები,მსუბუქი ქსოვილები, მაღალწელიანი ქვედაბოლოები. ძირითადი ფერები კი : თეთრი, შავი, ნაცრისფერი და ოქროსფერი იყო, ასევე წითელი, ლურჯი და ყვითელი. ახლა კი ვნახოთ რას წერენ მის კოლექციის შესახებ ერთ–ერთ საიტზე.
We lost count somewhere around 90 when we tried to tally the photographers in the pit at Jason Wu's Chelsea show today. The designer's rise has been fairly meteoric, thanks in part to Michelle Obama, of course. But it struck you, looking at his Fall collection: The clothes are legitimately living up to his outsized reputation. Wu's always been about a polished, preternaturally ladylike look. What was noteworthy about this outing was how consistent it was, and how well his "baroque meets sportswear" message (inspired, he said, by a Robert Polidori book on the 25-year restoration of Versailles) held together from beginning to end. Like last season, the designer put a big emphasis on tailoring. He opened with a charcoal gray coat flung over the shoulders of a cropped jacket, printed blouse, and cigarette pants. But this wasn't your average wool flannel coat; it came with a strip of black lace down each sleeve. In fact, Wu made lace, which is shaping up to be an early New York trend, an integral part of this collection. The storm flap of another coat was swathed in the delicate stuff. By embroidering little bits of it onto blouses or A-line, slightly above-the-knee skirts, he engineered it to look like a print. And for evening, he embellished a gold lace gown with thousands of metallic sequins and paillettes. That wasn't the only place he went for baroque. When a jacket or a coat-dress or a shirtdress wasn't embroidered with lace, it was embellished with dense clusters of colorful stones. (Odile Gilbert painted gold-leaf pigment into the models' updos to match.) And Wu reprised his signature feather pouf cocktail dresses in both black and nude, the show's dominant colors. If there's a critique to be leveled, it's the absence of sex. When the new designers at Valentino do this sort of thing, there can be a charged, even dirty undercurrent. Here it read mostly as prim. The word Wu himself used was "austere." But we quibble. There's no denying that this ambitious designer has a hit on his hands. 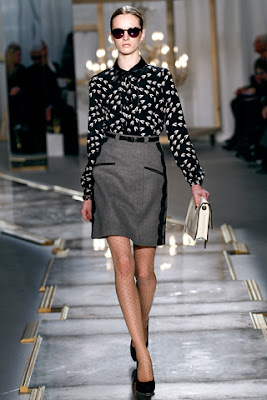 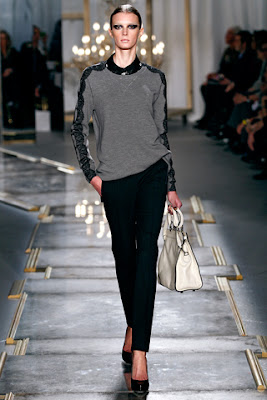 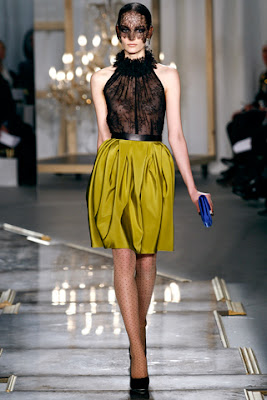 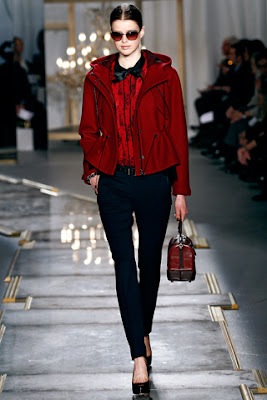 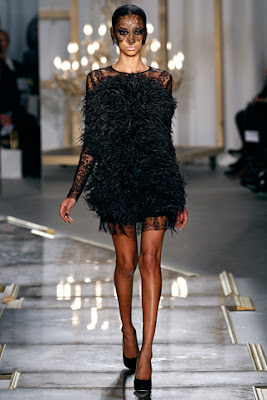 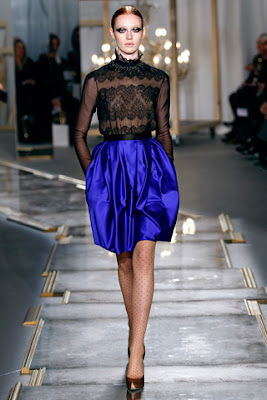 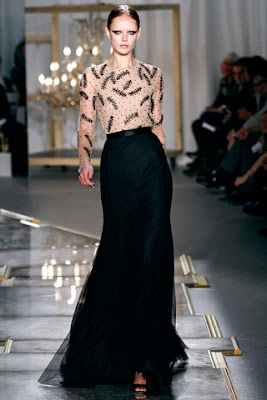 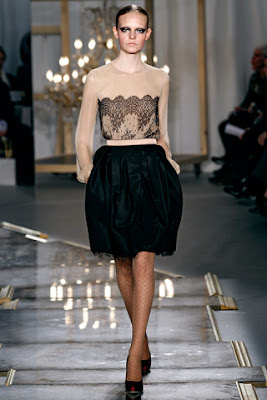 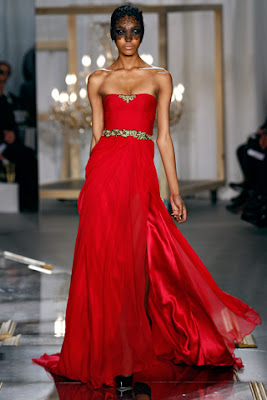 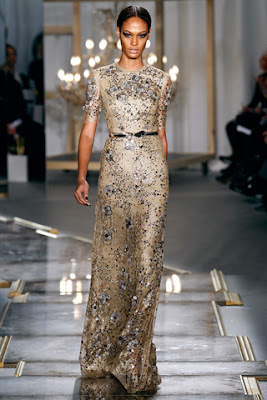 Posted by Nuca Gegechkori at 3:56 PM
Email ThisBlogThis!Share to TwitterShare to FacebookShare to Pinterest

Find me on Polyvore